Ernst Friedrich "Fritz" Schumacher is best known for being the author of the 1973 book Small Is Beautiful which was rated as being among the 100 most influential books published since World War II. E.F. Schumacher was an economist and statistician.

Being German-born, for a period during World War II Schumacher was interned on an isolated English farm as an "enemy alien." In those years, Schumacher captured the attention of John Maynard Keynes with a paper entitled "Multilateral Clearing" that he had written between sessions working in the fields of the internment camp. Keynes recognised the young German's understanding and abilities, and was able to have Schumacher released from internment. Schumacher helped the British government mobilise economically and financially during World War II, and Keynes found a position for him at Oxford University.

Thinking outside the box
In 1955 Schumacher travelled to Burma as an economic consultant. While there, he developed the set of principles he called Buddhist economics, based on the belief that individuals needed good work for proper human development. He also proclaimed that "production from local resources for local needs is the most rational way of economic life." He traveled throughout many Third World countries, encouraging local governments to create self-reliant economies. Schumacher's experience led him to become a pioneer of what is now called appropriate technology: user-friendly and ecologically suitable technology applicable to the scale of the community.

.
Relevance of Schumacher's thinking for us
I've been assiduously following Sakmongkol's series on the Malay race, ethnicity, economic motivation and such and etheorist's series on Keynesian Irrelevance and his current Reboot series. But, rather than to launch into a half-baked set of propositions that either augments or contradicts Sakmongkol or etheorist, my humble contribution is to point the reader to a short essay by E.F. Schumacher entitled, Buddhist economics first published in 1966.

Don't be put off by the title as Schumacher wasn't adopting religious values. Rather, he was advocating a non-Western, non-Protestant work ethic approach to economics and way of life. 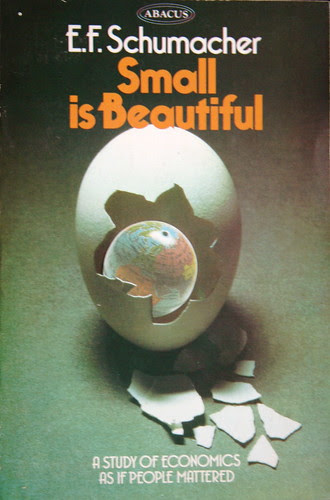 .
As Asians, Malaysians from every ethnic origin, will find Schumacher's view of economics and living values very resonant.

Perhaps, 2009, which by all accounts will be a difficult economic year, will be a good year to revisit the Schumacher view of the world. Read the essay, Buddhist Economics, first. Then start looking for his collection of essays in his book, Small is Beautiful.
Posted by de minimis at 2:50 AM

Email ThisBlogThis!Share to TwitterShare to FacebookShare to Pinterest
Labels: Economics

bro de minimis,
thank you for this thought provoking piece. i read e.f. schumacher in the late 70's but probably like most of my generation then, treated it as a curiosity. with this short article, i shall be reading it again with renewed interest.
with warmest regards/sakmongkol

It gives me tremendous encouragement that you find my little post to be of some relevance to your continuing inquiry into the socio-economics of Malaysia.

Thanks for this piece which made me talk a walk down memory lane as I read it in the late 70s.

Sadly, I lost my copy and guess it is time to get a replacement.

Best wishes for the coming new year to you and yours.

I'm puzzled with this one:
He also proclaimed that "production from local resources for local needs is the most rational way of economic life."

The most rational way...
But doesn't it mean that "exports be damned!"? There's also the problem of local resources not being adequate. Or a surplus of resources that can't be utilised for local needs?

And if that were to be practised now, there won't be "Home Offices" in Bangalore servicing US manufacturing companies' clients all over the American continent.

That is exactly what Schumacher was espousing. If you read the inquiry of the Malay psyche and ethos as written by Sak and, the simply-worded but thought-laden words of etheorist, you will find that Schumcaher's perspective fits into their views quite comfortably.

The basic proposition is, agrarian way of life is at serious risk of being completely supplanted by the urban way of life. Which one has better values for living? Those of us who live outside Klang Valley will understand this implicitly.

Everything that urban living promotes is artificial. Good to see, fatal to consume, the only variable being time.

The need for economic growth at any cost, at any price, is a Western value described to various extents by the likes of Thorsten Veblen, Max Weber and John Kenneth Galbraith. Malaysia is, caught in this production paradigm.

I'm not as articulate as Sak and etheorist. But it has occurred to me time and again during the course of my readings that the Malays have the correct values for living. But, in the push for urbanisation and industrialisation, the Malays are being told that they are so backward and weakminded. Is that a correct accusation? Someone as great as EF Schumacher would not agree with such an accusation. That is why I humbly offered his essay as a starting reference.

Sak's and etheorist's inquiry has broad implications for the way all Malaysians perceive the current way of life. They are great minds that are able to invite further inquiry into the economic and living values that Malaysians are being forced to accept.

The negative impact of the current value system is so great that we are seeing more marital breakdowns, family breakdowns and mental breakdowns. That, surely, cannot be human nature. That is why I see Sak and etheorist as the key thinkers for Malaysia and, by so saying, I'm not exagerating.