Tough love for the Chinaman

It's hard to be a Malaysian citizen these days, even for someone who is as proudly Malaysian as I am.

Most days I just enjoy being Malaysian with all my Malaysian colleagues, Malaysian business partners and Malaysian friends.

It's really annoying when my ethnicity is constantly brought up with sneering negative connotations.

If it is not tak kenang budi levelled by one side, it is bodoh by the other side.

Is this a form of tough love for the Malaysian who is of Chinese descent?

Do these people actually believe that by insults, scolding and sneering the Chinese Malaysians will experience an epiphanic fit and suddenly see the error of their ways?

Thank goodness real Malaysians are not that dumb.

Thank goodness real Malaysians are mostly happy with each other.

If only the politicians will start eating their own toxic shit and just die from it. Then, Malaysia will be a much better place again.
Posted by de minimis at 6:42 PM 2 comments:

Email ThisBlogThis!Share to TwitterShare to FacebookShare to Pinterest
Labels: politics

This is an interesting piece from the Financial Times relating to education. It highlights the importance of having Critical Thinking approaches in the education syllabus. Note the levels achieved by Malaysia's Asian Tiger neighbours.

This is a goal that Malaysian education needs to meet. The time is now.

Here is a snippet. The full article by Jeevan Vasagar can be found here.

Schools in Europe are frequently criticised by business leaders as “exam factories” that churn out students unable to cope with life beyond the classroom. But the lesson to be drawn from international comparison is that Europe’s schools are far better at teaching creative thought than this criticism implies.

Students from the main western European countries – England, France, Germany, Italy, the Netherlands and Belgium – all performed above the average, as did pupils from the Czech Republic and Estonia. In the rest of the rich world, the US, Canada and Australia also performed above average. But the laurels were taken by east Asian territories; Singapore and South Korea performed best, followed by Japan, and the Chinese regions of Macau and Hong Kong.

That result poses a challenge to schools in the west. Critics of east Asian education systems attribute their success at maths and science to rote learning.

But the OECD’s assessment suggests that schools in east Asia are developing thinking skills as well as providing a solid grounding in core subjects.

Across the world, the OECD study found a strong and positive correlation between performance in problem solving and performance in maths, reading and science.

In general, the high-performing students were also the ones best able to cope with unfamiliar situations.

But there were interesting exceptions to the rule. When Japanese students were compared with children in other countries of similar performance in maths, science and reading, the Japanese teenagers showed better problem-solving abilities.

This, the OECD suggested, might be explained by Japan’s focus on developing problem- solving skills through cross-curricular, student-led projects.

While there is agreement about the goal, there is a divide over how best to teach children the skill of critical thinking.

Daisy Christodoulou, an educationalist and the author of Seven Myths about Education, argues that such skills are domain specific – they cannot be transferred to an area where our knowledge is limited.

“Trying to teach abstract strategies that can apply across domains, there isn’t much evidence for that,” she says.

Read the full piece here.
Posted by de minimis at 8:49 AM 2 comments:

Personality versus structure and process

If there is anything that the study of History teaches us, it should be that all the great feats of heroes come to naught if there was no structure in place that institutes fairness. I deliberately use the words "fairness" in place of the more commonplace word, "justice". I have found that when one uses the word "justice" everyone has a different understanding of what constitutes justice, whereas, when the word "fairness" is used there is an broader consensus.

Inasmuch as engineers and architects design physical structures that makes it as comfortable and sensible as possible for users to benefit from the process of using such structures for the longest possible time, laws created and enacted by political leaders must also undergo similar tests of relevance and robust relevance.

If you trouble yourself to read history books or biographies of significant personalities, look out for aspects of what these past personages did in putting in place values, rules or processes and, then, look at whether those values, rules and processes are still in place today.

In the course of my history readings I have come across, time and again, great events involving great leaders of the day where a good outcome involves a leader having the foresight and humility to institutes structures and processes that have a foundation in fairness. These outcomes have longevity and continued relevance.

In contrast, scenarios involving leaders who had great self-belief in their own sense of fairness and the impatience with the plodding pace of instituting structures and processes have often led to short-term gains with the attendant long-term legacy of pain and discomfort as a consequence.

Not many Malaysians remember the late Professor Hugh Hickling. In the course of his long career he had many roles in the nascent Malayan and Malaysian nation. One of his roles was that of the Commissioner for Law Revision for Malaya in the late 1950s and early 1960s. In that role, Hickling drafted the Internal Security Act 1960 primarily as a statutory tool to combat the threat of Communism that had so badly affected peace in Malaya.

In later years, Hickling always sought to expiate his role in the creation of the Internal Security Act 1960 that so haunted many poilitically active Malaysians and, Hickling himself. I had the opportunity to hear him explain, by way of expiation, that in the course of drafting that piece of legislation Hickling had expressed to the late Tun Abdul Razak, who was Deputy Prime Minister at the time, his concerns about the width, length and breadth of powers given by the Internal Security Act 1960 to the Executive Branch of Government.

According to Hickling, Tun Razak's reply was that he, Tun Razak, knew how to utilise those statutory powers and, he knew where to draw the line, that is to say, what types of actions would constitute an abuse of those sweeping powers.

Needless to say, Tun Razak knew what he was doing, being an intelligent and legally trained leader. Tun Razak's sense of fairness is well-documented. This leadership trait was proven beyond doubt in the way he handled the May 13, 1969 riots when, as the Director of the National Operations Council he had dictatorial powers. Tun Razak's uncommon common sense and sense of fairplay shone through when constitutional and parliamentary processes were quickly reinstituted by 1972.

The Internal Security Act 1960 was clearly in good hands under Tun Razak. Whether such powers were abused by subsequent leaders is a matter for historians and academicians. Suffice to say here that the Internal Security Act 1960 was an example of questionable structures and processes that worked only if the correct personality was holding the reins of power. In the wrong hands, such a piece of sweeping legislation was very much open to abuse.

From the standpoint of my basic proposition about the importance of structure and process over personality, the Internal Security Act 1960 is one of the chief culprits for having engendered a legislative drafting culture where statutory powers are almost always drafted together with language that forbids or prevents an audit or review of the exercise of such powers. This makes the personage of the Minister or Government Officer very crucial. A cavalier personality will wield such powers freely and arbitrarily. A personage with a sense of fairmindedness will exercise more restraint. Such a structure cannot be good.

Since we are on the matter of structure and process which has taken a legal twist, I now steer it back to a neutral position by leaving you with a piece of engineering wisdom-

An electrical, a mechanical and a civil engineer all sat down one day to try and decide of which of their faculties god must be to design the human body.

Finally after hearing the civil engineers arguments, both the mechanical and electrical engineer both agreed that god must be a civil engineer, for who else would run a sewer system through a recreational area!

Why I hardly blog anymore

I actually find the title to this post a little narcissistic and, I thought to myself, why not push on anyway? Indeed, why, not?

Blogging brought me a release of sorts. Prior to blogging I maintained a series of journals for jotting down itinerant thoughts. Academic papers brought a depth of thinking and analysis of a straitjacket kind...there were rules of engagement in academic settings, you see.

Blogging, on the other hand, had no rules. It was a blank canvas. For younger blogging contemporaries taking to blogging must have been like a duck taking to water. It was almost intuitive and seamless.

For people of my vintage, with world views tempered by bitter experiences past and forged by fear, the decision to blog was a ponderous and difficult mental journey.

Did I have anything worthwhile to say? Do I use blogging as a form of catharthic release from any sense of responsibility without any regard for my words and utterances? It did seem, from a third party perspective of the stuff and nonsense that was being put out in cyberspace, that the gap between responsibility and thoughtful, contemplative writing and pure venomous drivel was, in fact, a huge chasm. There was no consistency of quality whatsoever.

I finally found my natural "voice".

The blog posts that preceded this is, in many ways, the "voice" that I feel comfortable with.

Writing and thinking per se gives me much pleasure. The dopamine effect of putting together a properly expressed prose is addictive.

There it is. By randomly jotting down my thoughts in this blog post I have answered to myself why I have been parsimonious in blog posts in recent years.

As it turns out I have been busy writing and thinking and analysing other stuff...ones that people actually are requesting for me to do.

And, the pleasure is doubled if the wordcrafting is done while downing a good brew.

John Kenneth Galbraith was an economist, first and foremost. But, he had a fine way with words. His great prose was part of the reason that he so impressed both, John F. Kennedy and, equally importantly, Mrs Jacqueline Kennedy.

One of Galbraith's seminal books that I had the pleasure of reading was The Affluent Society (1958). In it he argued that the United States' wealth accumulation in the private sector was not commensurate with public spending that would benefit the wider public and citizenry. In a capitalistic milieu Galbraith was not quite a Socialist, but most certainly, a Keynesian economist with a social conscience.

Galbraith was appointed the U.S. Ambassador to India during the Kennedy Administration. 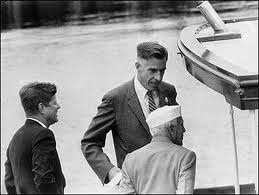 Among the famous phrases he coined was the phrase conventional wisdom, which he first used in The Affluent Society.

And, in the context of what we witness today in Malaysia, where nation building appears to have taken a backseat to guileless and clueless leadership, we need to take some heed of a piece of wisdom offered by Galbraith, unconventional as it may be in the Malaysian political scene of today-

All of the great leaders have had one characteristic in common: it was the willingness to confront unequivocally the major anxiety of their people in their time. This, and not much else, is the essence of leadership.