Selangor: The Sultan and the Constitution

The constitutional matters in Selangor surrounding the matter of the position of the Mentri Besar is, in the first instance, an unnecessary event that had arisen purely due to a factional matter within a political party.

This was probably the scenario that was intended to be played out in Selangor. But, as with all things in this real world of ours, as opposed to the make believe world of scenario planners and, some say, strategists, the main players in this Selangor saga exhibited and unexpected sentience.

Sentience in third parties and among plebeians is a very annoying phenomenon for people in power.

Sentience forces people in power to explain things that are better kept in their sick and twisted minds.

In the present matter, sentience as exhibited by the sitting Mentri Besar is proving to be a serious thorn on the side of his own party and, has spilled over to threaten the very fabric of the loose political pact that administers the State of Selangor.

To make matters worse for these people, the constitutional issues and procedures surrounding the position of the Mentri Besar is proving to be another unexpected major matter.

It appears that His Royal Highness The Sultan of Selangor has also exhibited  constitutional sentience.

HRH The Sultan has asked the three political parties to submit a list of possible successors to assume the role of the Mentri Besar.

The question that has arisen is whether it is constitutionally proper for HRH The Sultan to make that request.

As with all legal issues, there is no straightforward answer. This is something that people without formal legal training and, many with such training, fail to understand or, to accept.

In my considered opinion, HRH The Sultan is perfectly on point to make such request.

Firstly, the language of Section 53(2)(a) of the Constitution of the State of Selangor makes it plainly clear that in the matter of the appointment of the Mentri Besar, HRH The Sultan, "shall first appoint as Mentri Besar to preside over the State Executive Council, a member of the Legislature Assembly who in His judgment is likely to command the confidence of the majority of the members of the Assembly".

The constitutional phrase, "in His judgment" is quite clearly a reference to a personal discretion to be exercised by HRH The Sultan. What this means, in effect, is that HRH The Sultan can use any constitutional and reasonable means to establish whether any single member of the State Assembly is likely to receive a majority support in the Assembly.

HRH The Sultan can wait for a vote of no confidence to be held in the State Assembly. Or, he can do what He is doing now, which is to canvass the views of each of the 3 political parties that had earlier coalesced. It's literally a straw poll, as the Americans call it.

Is this procedure wrong? The Federal Court in the Perak Mentri Besar case has said this is a proper procedure that can operate in parallel with the traditional process of requiring a vote of no confidence. Many legal practitioners and constitutional scholars have clearly and publicly confirmed this to be a proper procedure.

Perhaps the apposite question is, why aren't the 3 political parties convening an emergency sitting of the State Assembly to initiate a no confidence motion?

Secondly, it is absurd for any person to make an issue of the role of HRH The Sultan in this fracas. HRH The Sultan is being required to play his constitutional role due to events created by the political parties.

HRH The Sultan was and, to my mind, is still acting in full dignity above the political fray in requiring names of 2 or more Mentri Besar candidates to be submitted by each of the political parties in the loose Selangor Pakatan Rakyat coalition.

So, I implore people to cease and desist for casting any unfair and inappropriate remarks against HRH The Sultan or the Monarchy. The State Monarch has acted with dignity and fully in accordance with proper constitutional process.

It is proper that He does not descend into the cesspool of politics.

The political parties in this wrangle who are in the cesspool should conduct their mud wrestling at that level without attempting to throw any mud let alone pull HRH The Sultan into that dirty pit. 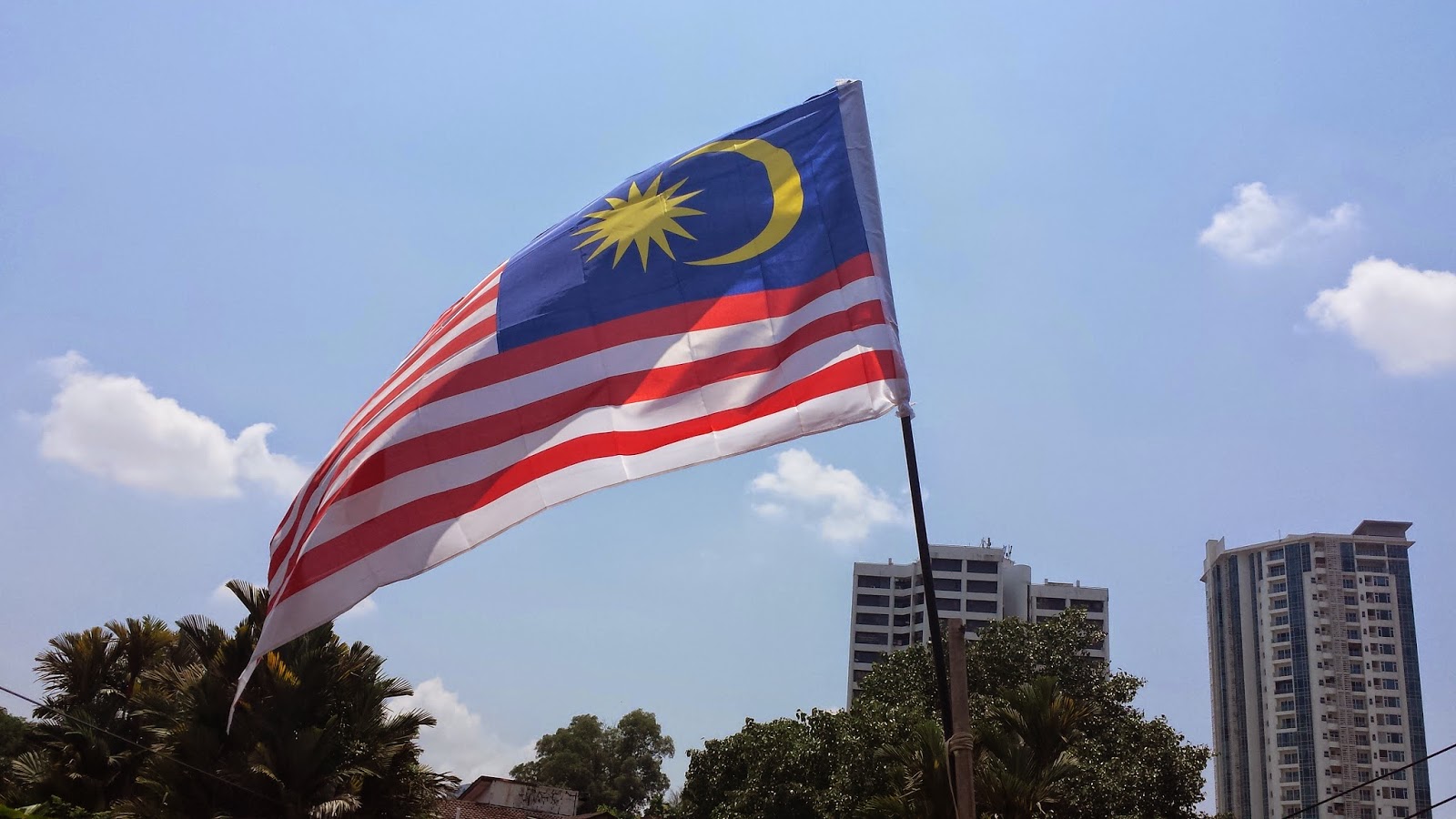 Last week my teenage daughter asked me why I haven't hoisted the Jalur Gemilang in our house yet. In meek self-defence I said that I was meaning to. Besides, the key period is between 31st August and 16th September isn't it?

I took her prod in proper spirit.

I reflected that in the wake of the challenges that Malaysia has continued to face since the tragic events surrounding flights MH370 and MH17 it is the right thing to fly Jalur Gemilang earlier than scheduled.

Malaysia is my country and I am proud to be a born and bred Malaysian.

HIDUP MALAYSIA!
Posted by de minimis at 9:07 AM No comments: