I join all Malaysians in expressing my profound sorrow at the news of Yasmin Ahmad's passing. 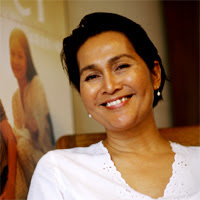 The Malaysian Insider reports that:

Her death was confirmed by Media Prime Group Chief Operations Officer Datuk Seri Ahmad Farid Ridzuan, who was at the Damansara Specialist Hospital, when contacted by Bernama.

Yasmin, 51, collapsed while presenting a working paper at Sri Pentas, the headquarters of the private television station TV3 on Thursday and was rushed to the Damnsara Specialists Hospital.

She was reported to have suffered a stroke and brain haemorrhage.

This Benama's eulogy of sorts:

Yasmin Ahmad left a legacy of her works in the film and advertisement arenas, thriving on the themes of love, family ties and comedy against the backdrop of multiracial Malaysia.

Married to Abdullah Tan Yew Leong, she began her career as a copywriter with Ogilvy & Mather before joining Leo Burnnett as joint creative director in 1993 and rose to become its creative executive director until her death.

Her creativity could be seen in many Petronas' commercials and evoked emotion of the viewers especially during the Aidilfitri celebration which would certainly be missed by viewers this year.

In the filming industry, Yasmin, however, drew much controversy in view of her openness and boldness in analysing social issues.

Despite the drawbacks, she also earned rave reviews for "Sepet" which was accorded the Best Film Award and the Best Original Screenplay Award at the Malaysian Film Festival 2005.

While leaving indelible mark at home, Yasmin's movies gained international recognition as they were shown in Berlin, San Francisco, Singapore and at the Cannes Film Festival.
Posted by de minimis at 2:55 AM

Email ThisBlogThis!Share to TwitterShare to FacebookShare to Pinterest
Labels: ????