The Malay folk wisdom states, Bila sesat, balik ke pangkal jalan which can be loosely translated as, If you are lost, return to the starting point (or the origin).

It is submitted that the pangkal jalan in the context of Malaysian education must irrefutably be the Razak Report of 1956, the official name being Report of the Education Committee 1956. The full Report is available here.

The key objective of the Razak Report was, "to examine the present education policy...and to recommend any alterations or adaptations that are necessary with a view to establishing a national system of education acceptable to the people of the Federation as a whole; which will satisfy their needs and promote their cultural, social, economic and political development as a nation; having regard to the intention to make Malay the national language of the country, whilst preserving and sustaining the growth of the languages and cultures of other communities living in the country".

The Razak Report recommended an eventual introduction of an integrated national system of education that was to be based on a common syllabus and suited to the needs of a developing nation and polygenous society.

The Razak Report also stated its intention to establish National and National-type secondary schools in which there would be a common syllabus where the Malay and English languages would be made compulsory.

Given their vintage most of the current Cabinet members are products of the Razak Report.

How quickly we forget our foundation years!

In the Rahman Talib Report of 1961 that reviewed and endorsed the Razak Report, many further provisions were made to allow Malay students easier passage into National-type schools with the English medium of instruction.

In the decades following these two seminal Reports, a strange and myopic form of parochialism set in to distort the original educational policy.

Economic growth - the expansion of economic output - requires an increase in the quantity of productive plant and equipment of the country or in its quality or, as in the usual case, in both. This is fully agreed. The increase in quantity is capital formation. The increase in quality is technological advance.

In addition to the entrepreneurs (and perhaps one should add, the accountants and clerks) who were more or less automatically forthcoming, modern economic activity now requires a great number of trained and qualified people. Investment in human beings is, prima facie, as important as investment in material capital. The one, in its modern complexity, depends on the other.

What is more important, the improvement in capital-technological advance- is now almost wholly dependent on investment in education, training and scientific opportunity for individuals. 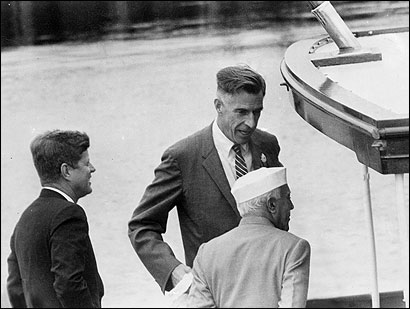 This observation coming from a widely renowned Harvard-based economist of the 1950s (he was, in the 1960s, mostly busy with ambassadorial duties for the Kennedy and Johnson Administrations) must surely warrant a pause by the Malaysian education policy-makers to re-visit the Razak Report to understand and imbibe its original intent.

To put it in a non-gender specific and, purely educational policy context, surely what's good for the (leadership) goose must be good for the (rakyat) gander.
Posted by de minimis at 6:45 PM

PAGE added this article to our Open Your Mind! link. Keep up the good work and thanks for your support :-)